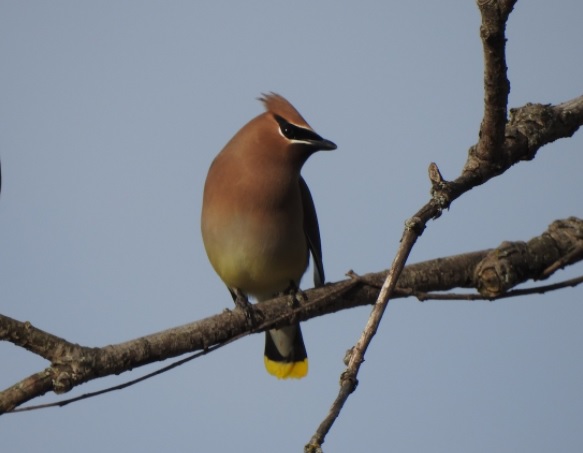 My eyes are terrible, and I rely on ear-birding to make up for it. I’ve always thought of my hearing as being good, other than having some obnoxious tinnitus resulting from decades of loud music. But today I got a clear demonstration that my ears are not what I thought they were.

I’d walked over to my local reserve, hoping to make some decent recordings. As it was windy, I avoided areas with large trees that were making a lot of noise, and instead focused on some open areas with smaller, scattered trees. I found a pair of Fox Sparrows chipping back and forth – which was good, because I had never recorded them before. And then I found the first of several flocks of Cedar Waxwings; on eBird I reported a count of 250, but there were likely more than that. I was less concerned with counting than I was with getting as close as possible for recording. They have been an “audio nemesis bird” for me, never vocalizing when I’ve had my recorder ready. I figured with so many of them out today, at least a few would want to talk.

But as I stood there with my shotgun microphone pointed at them, I heard nothing. Just the wind, the occasional Blue Jay, or the airplanes headed in and out of MSP airport; we are often in the flight path here in West Bloomington. I was getting a bit peeved with these little songbirds. Not a single trill or high pitched whistled was to be heard.

I kept seeking out different waxwing groups and pointing the mic at them, in hopes I would get some cooperation. After about an hour of this, I’d had enough and walked home dejected. After I verified the Fox Sparrow recording and uploading it to eBird, I decided to look at some of the attempted waxwing recordings. I was shocked to see that the spectrograms were very clear: all kinds of trills and whistles were present. My hardware did a lovely job of picking them up, and listening back with my headphones, I could hear them all clearly. In the field? Nothing. So I filtered out the low-frequency junk and uploaded five recording to the Macauley Library. Audio Nemesis no more.

So a few morals to this story follow… Even if you think your hearing is okay, it may not be what you imagine. If you record birds even when it seems they might not be vocalizing, you could end up surprised, at least with a species that works in a frequency range you have trouble with. With some decent technology deployed in the field, one has a chance to hear bird calls missed earlier, after the fact – better than nothing! It is another reason why a handy digital recorder is a tool every birder should have.

The biggest takeaway, of course, is that we are, at best, able-bodied for a limited time only. Investing in an organizaton like Birdability isn’t just helping a few folks with serious disabilities now – it is helping every birder, now, or in the future.

View all posts by legallyblindbirding