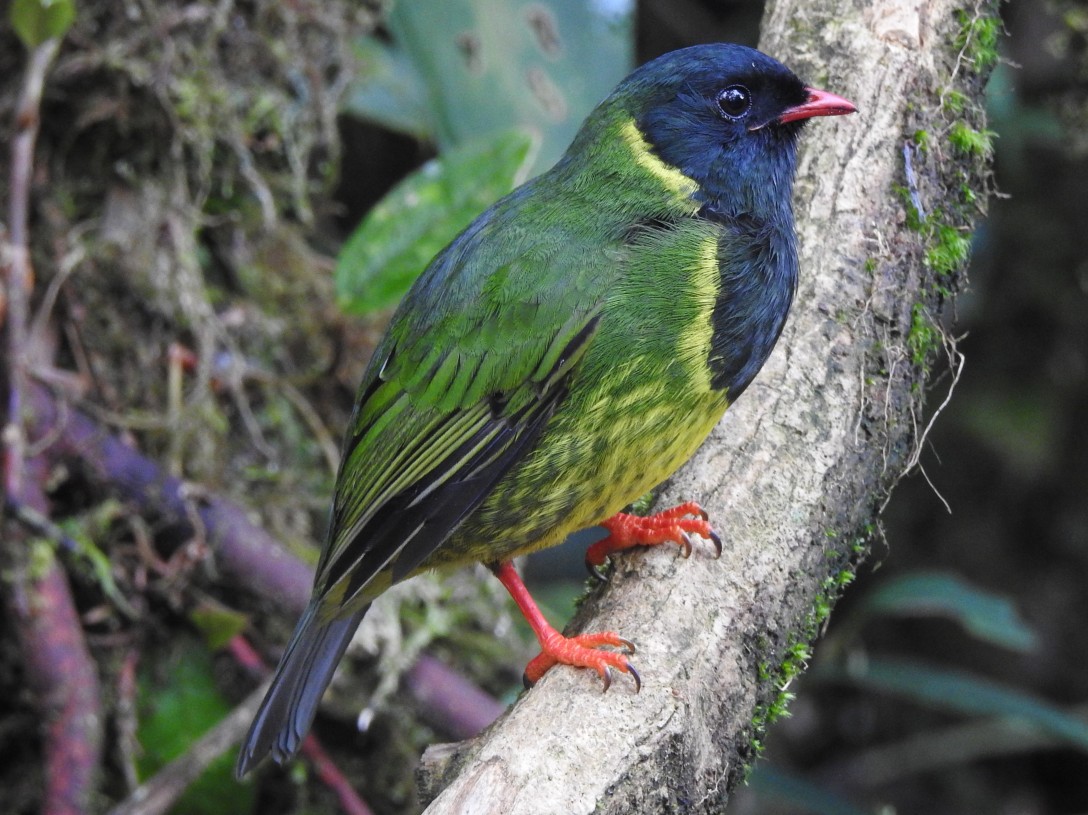 I’ve been a serious birder for over 26 years. And by ‘birder’ I mean to say that I am gripped by an abnormal preoccupation with all things avian, including a compulsion to see or hear as many bird species as is humanly possible. While not outdoors seeking them, I tend to be planning to find them, reading about them, drawing them, or studying their calls.

I am hardly alone in this mania; certainly there are and have been others even more bewitched by these little plumed dinosaurs than I am, but… I’m pretty damn obsessed.

Now, I am also legally blind, as I suffer from Retinitis Pigmentosa (RP), a group of a genetic diseases which usually result in the loss of night and peripheral vision – or the loss of all vision.

Bird fanatic. Legally blind. This is not an ideal combination of circumstances.

It is easy to describe the loss of night vision: there is simply nothing to see in the dark. It also means that low-light conditions – such as what one commonly finds in a dimly-lit restaurant, for example – are similar to having no light at all. Twilight might as well be midnight when you have RP.

What does it mean to lose peripheral vision? Try this experiment: extend one of your arms, straight ahead, with the palm up and all the fingers together, as if someone was going to place something in your hand. Focus on the tip of your pinky finger. Got it? Now wiggle your thumb up and down while focusing on the pinky. You will, of course, see your thumb moving, as well as many other things even further to that side of your extended hand.

When I do this, I can see four fingers, but not the thumb. Or anything else off to the sides, or above, or below. This is sometimes called ‘tunnel vision.’ One can quantify this in terms of the width of the visual field, which for healthy eyesight would be some 180 degrees from one side to the other. My visual field is less than 15 degrees wide.

RP makes birding much more difficult – sometimes it makes it damn frustrating, and I’ve been tempted more than once to throw down my binoculars and give it up. But I don’t, because: (1) obsessions don’t just go away, and (2) I know that I am lucky; I’ve still got a little vision left. Some RP victims lose their sight entirely.  So I will use what is left of my eyesight in the best way possible: for seeing as many birds as I can, while I can.

My eyesight was fine when I was a child. In fact, at age twelve or so, I discovered astronomy, and was wont to spend every clear night searching out celestial treasures. I was a devoted member of the Salt Lake Astronomical Society for a number of years.

Later, in college, I would trade gazing at stars for staring at physics textbooks. I only became aware of a change in my vision during my twenties: one evening, while I was in graduate school, my wife and I attended at a ‘star party’, which a local astronomy club had set up. One particular large telescope was directed at the famous, wispy Veil Nebula – and was providing an image that was getting rave reviews from everyone – but when I peered through it, I saw… nothing.

Odd. I didn’t understand. I stepped back from the eypiece and then my wife looked and exclaimed happily about the lovely sight. I looked again. Absolutely. Nothing.

That night was a bit of a revelation. Normally, you don’t just suddenly notice one day that you have poor eyesight. Rather, it creeps up on you, giving you occasional hints. Several years later, I would drive into a fence that suddenly seemed to have popped into existence. I started having episodes where I would see odd, random light flashes and patterns. I got the official diagnosis of RP shortly after that. I was 29.

But I was about 26 when I became aware of my affinity for all things avian, around the time that I had started my physics Ph.D program at Colorado State University. I was studying at a park one spring afternoon when a woodpecker, feeding on the ground, captured my attention. I needed to know what this strange creature was called. I headed directly to a bookstore, bought a Peterson Guide to Western Birds, and learned that it was a Northern Flicker that would be my first lifer and the instigator of this compulsion. Several months later, I would meet a comely, wildlife biology graduate student named Claire –  it was on our second or third date that she would mention, off-hand, that she had spent the afternoon out birding (birding! there was a word for it!) with the local Audubon group. I knew then that I would have to marry her.

Presently we live in Twin Cities and have two sons at the University of Minnesota. Time for birding had been scarce during most of these 26 years, but our efforts have been accelerating recently, as the nest is now essentially empty.

My plan is to reach at least 5,300 life birds, despite the visual disability. Why this number? Well, there is profound appeal to saying “I have seen (or heard) the majority of bird species on the planet.” Currently, the Clements-based eBird species total stands at over 10,500. My goal is based on half of this number, plus a 1% margin factor (in other words, 50.5% of all species). I cannot know how long I will have even my currently terrible vision, so I am making a concerted effort to meet the goal in the next few years.

The site is not intended to be about my life list or my bad eyesight; I hope to merely provide content of interest occasionally, and perhaps some awareness of, and maybe even help for, the subset of us that have to deal with some physical disability, visual or otherwise, while birding.